Sheep flock–follow the leader wherever they go 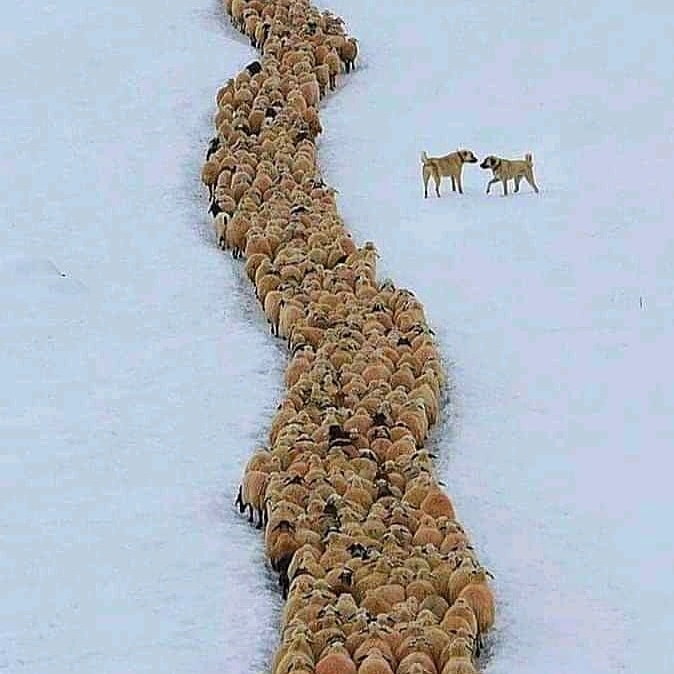 Sheep are highly social animals that continually require other sheep in the flock to be present. They are hardwired to follow each other even when the lead sheep is sending them to danger such as falling over a cliff. As a result the follow-the-leader instinct, shepherds have controlled sheep for centuries. This flock insticnt has helped sheep to protect themselves from predators. Occasionally some sheep drift away from the flock during predator attack, blizzards, etc. Outliers get agitated, starts to bleat until they rejoin their family flock.

Leadersheep are a strain of sheep from Iceland that display high intelligence and leadership. They are known to have the ability to lead a flock home during tough conditions–they possess a superior ability to sense danger. In Iceland, a lot of narrations are told of leadership have saved numerous lives during the most difficult conditions. This impressive ability by leadership is still even displayed during blizzards and fall roundups. This breed of sheep can survive these difficult natural occurrences even without a shepherd.

Sheep are prey organisms and their natural reaction to predators is to flee not fight. It is easier for a predator to attack and kill a single strayed animal that it would if they are in a group. However, some primitive species of sheep are know to demonstrate certain level of aggression–standing up to predators.

Flocking is generally beneficial to sheep—helping protect the flock against predators and keeping the flock warm during cold seasons.