Are we headed for a sixth mass extinction? 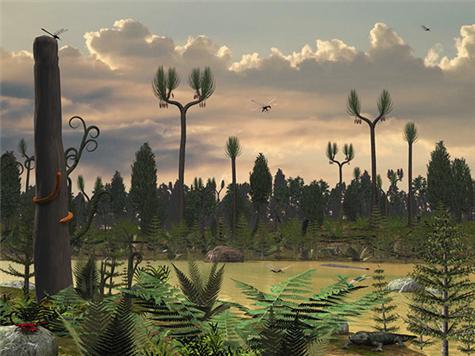 During the carboniferous period(358-272 million years ago), Earth was dominated by giant thick tall trees. For centuries, these trees stood strong with no sign that they will ever perish. They stood beautifully and grew to record heights and thicknesses.

But then, there was a problem. As the lifespan of the trees elapsed, they fell and died. However microorganisms could not effectively decompose them. Dead trees laid decades almost afresh. Then a clutter and pile of these trees started increasing in this ancient great forests. Other trees fell because of the impact of the fall of previous ones. Absence of decomposition meant, there was no space for new trees to grow. The fall went on until significant portion of the forests were nothing but dead trees.

Over the next couple of centuries, sedimentation caused this great tree piles to be covered and buried. Year by year, it was buried even deeper. Decomposition was slow but sure. By about 250million years ago, decomposition had happened greatly and tremendous amounts of gases and coal was trapped underground. The pressure from the gases built up until to a point where it could no longer be contained.

Then, there was a great loud evil burst. This happened severally across space and time, spewing ash and and carbon dioxide into the atmosphere. Ambient temperatures were disrupted. The gases caused the climate to change. About 90% of all plant and animal species perished. The carbon dioxide in the atmosphere was the major caused of the great death (extinction) popularly called the Carboniferous Extinction

The world keep burning fuel, increasing the carbon dioxide levels in our atmosphere. Our global temperatures keep rising. Developing countries like Ghana, South Africa, India and Kenya are the most affected. Food production is threatened. Hunger and poverty are the ripple effects of global warming. People are living in misery and drudgery. But multitudes of countries seem to get excited when oil is discovered. Should we rejoice when we  discover petroleum? Are we heading towards another mass extinction just as Professor Ceballos of the Autonomous University warns of a looming biological annihilation?