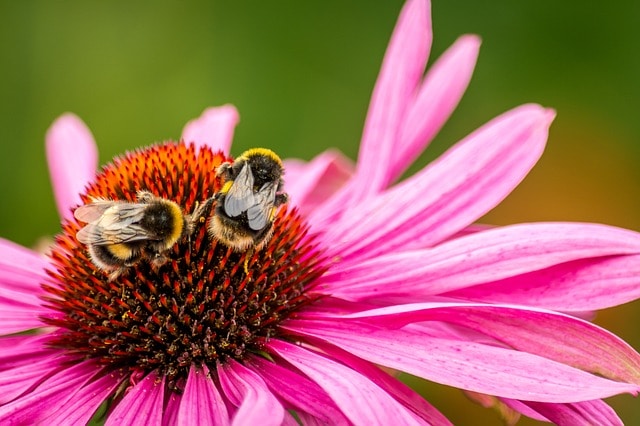 Researchers have found that hungry bumblebees trigger early flowering in plants. Hibernation is common in Bumblebees. It can take up a large amount of its life, and some queen bees can hibernate for nine months. That is almost about three quartersquarters of their life! Going into hibernation is essential in protecting the queens from the rigours of life above ground, predation, starvation and diseases After queen bumblebees wake from dormancy, it must gather food in order to establish a colony. It so happens that sometimes the queen wakes up from the state of dormancy too soon. When this happens, food become scarce as flowers would not have blossomed. Bumblebees trigger early flowering according to researchers.

Bumblebees cause flowers to blossom

Researchers have found that the bee has devised a way of causing flowers to blossom ahead of time. They make holes in leaves inducing plants to blossom well before its schedule. There are still important questions on how exactly that happens.Lars Chittka, a behavioral ecologist at the Queen Mary University of London noted that “It’s certainly surprising,” …… “We’re only at the beginning of exploring this phenomenon.”

This phenomenon was discovered by researchers at ETH Zürich. They noticed unusual markings caused by bites on leaves while studying the response of bees to plant odors. They added bumblebees to a greenhouse project and noticed the been cutting holes in the shape of half-moons. The initial hypothesis was that the insects might be feeding on fluid from the leaves but their time on the leaves were short and did not suggest they were feeding. They did not also take the leaves to their colonies as expected if they were feeding.

Bees from colonies with less food were severely damaging leaves than those from colonies with much food. They hypothesized that; the bites could be causing the plants to flower early so that the starved colonies could have food (pollen) earlier. Many plants are able to flower before schedule because of numerous factors such as stress, disease, drought, etc. But the idea that pollinators could cause plants to flower earlier was far-fetched.

The scientists conducted a greenhouse experiment involving Brassica nigra (black mustard) to see if bumblebees trigger early flowering. They kept ten mesh bags with bumble bees that had been starved of pollen for 3 days; the bees made five to 10 holes in each plant. What they found was exciting. On average, the plants with the bee-made holes flowered within 17 days; the control experiment involving undamaged plants flowered on an average of 33 days, the findings are reported in in Science. In another experiment, tomato plants flowered 30 days before schedule. “

Pollen starved bees 4 times the amount of holes than well fed bees. They also noticed that bees made fewer holes as spring progresses (and more pollen is available in the environment). The behaviour was also observed in at least two species (red-tailed and white-tailed bumble bees) suggesting the behavior may be present in multiple species. Consuelo De Moraes, a chemical ecologist at ETH Zürich who co-led the research noted that; “That was superexciting.”

The researchers found that damage to the leaves alone would induce the plants to blossom earlier. They cut similar-size holes manually in leaves. To their amazement, those plants flowered earlier than control experiments but not as much as the experiments involving the bees. Chittka said that; the bee saliva might contain phytochemicals triggered flowering. The researchers plan to chemical signalling involving the bees. “It would be a horticulturist’s dream if you could find some relatively low-cost biochemistry that would actually speed up flowering,” Chittka says.

The future of bumblebees and early plant flowering

But researchers are still trying to understand how such behavior evolved. Worker bees live only a month, it is not likely they learned the trick. Perhaps, the behaviour is instinctive. If it is instinctive, what will be the benefit to them?. Chittka noted that “For all of this to somehow have come about by evolutionary trial and error process”.……. “it’s surprising”. If this phenomenon is found to be viable in multiple commercial species, It can be mimicked by ecologists and horticulturist. This would bring great benefit to horticulture and food production.