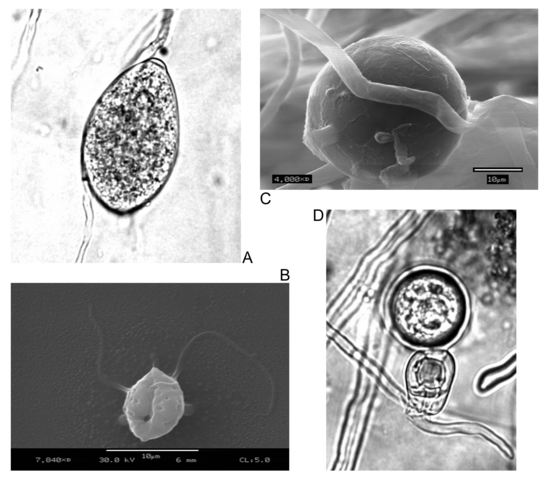 Oomycetes are a class of eukaryotic microorganisms with life cycles and growth habits similar to filamentous fungi, but are not true fungi. Although sexual reproduction, which produce oospores, is an essential stage of life cycle, the functions of critical regulators in this biological process remain unclear due to a lack of genome editing technologies and functional genomic studies in oomycetes.

In this study, Dr. Feng and colleagues developed the first CRISPR/Cas9 system-mediated gene knockout and in situ complementation methods for Pythium ultimum, a notorious oomycete pathogen that is responsible for a variety of diseases in a broad range of plant species. They further identified the Puf family RNA-binding protein PuM90 and the flavodoxin-like protein PuFLP as major functional factors involved in P. ultimum oospore formation. Also, they proposed a new model that PuM90 acts as a stage-specific post-transcriptional regulator by specifically binding to the 3′-UTR of PuFLP and then repressing PuFLP mRNA level. This study describes new technologies and data that will help to elucidate sexual reproduction and post-transcriptional regulation in oomycetes.

Sexual reproduction is an essential stage of the oomycete life cycle. However, the functions of critical regulators in this biological process remain unclear due to a lack of genome editing technologies and functional genomic studies in oomycetes. The notorious oomycete pathogen Pythium ultimum is responsible for a variety of diseases in a broad range of plant species. In this study, researchers revealed the mechanism through which PuM90, a stage-specific Puf family RNA-binding protein, regulates oospore formation in P. ultimum. They developed the first CRISPR/Cas9 system-mediated gene knockout and in situ complementation methods for Pythium. PuM90-knockout mutants were significantly defective in oospore formation, with empty oogonia or oospores larger in size with thinner oospore walls compared with the wild type.

A tripartite recognition motif (TRM) in the Puf domain of PuM90 could specifically bind to a UGUACAUA motif in the mRNA 3′ untranslated region (UTR) of PuFLP, which encodes a flavodoxin-like protein, and thereby repress PuFLP mRNA level to facilitate oospore formation. Phenotypes similar to PuM90-knockout mutants were observed with overexpression of PuFLP, mutation of key amino acids in the TRM of PuM90, or mutation of the 3′-UTR binding site in PuFLP. The results demonstrated that a specific interaction of the RNA-binding protein PuM90 with the 3′-UTR of PuFLP mRNA at the post-transcriptional regulation level is critical for the sexual reproduction of P. ultimum.