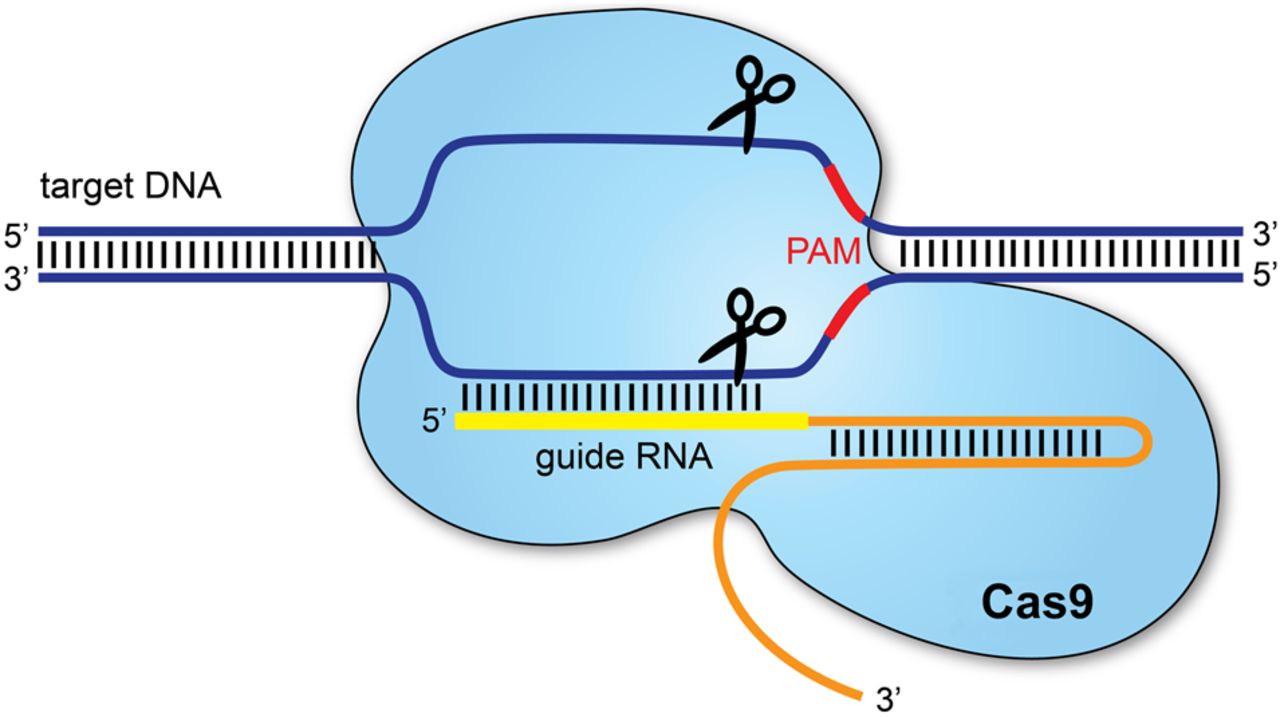 Gene editing is a group of technologies that scientists use to change an organism’s DNA. These technologies allow genetic material to be added, removed, or modified at particular locations in the genome. Several approaches to genome editing have been developed. A more recent one that has got the attention o all is known as CRISPR-Cas9, which is an acronym for Clustered Regularly Interspaced Short Palindromic Repeats and CRISPR-associated protein 9. The CRISPR-Cas9 system has generated a lot of excitement in the scientific community because it is faster, cheaper, more accurate, and more efficient than other existing genome editing methods. You probably have read it severally on the news lately.

The CRISPR-Cas9 similarly is replicated in the lab. Scientists create a small piece of RNA with a short”guide” sequence that binds to a specific target sequence of DNA in a genome. The RNA also binds to the Cas9 enzyme. Just like in bacteria, the modified RNA is used to recognize the DNA sequence, and the Cas9 enzyme cuts the DNA at the targeted location.

Although Cas9 is the enzyme that is used most often, other enzymes (for example, cas2a, Cpf1, etc) can also be used. Once the DNA is cut, researchers use the cell’s own DNA repair machinery to add or delete pieces of genetic material, or to make changes to the DNA by replacing an existing segment with a newly customized DNA sequence.

Genome editing is of great interest in the prevention and treatment of human diseases. Currently, most research on genome editing is done to understand diseases using cells and animal models. Scientists are still working to determine whether this approach is safe and effective for use in people. It is being explored in research on a wide variety of diseases, including single-gene disorders such as cystic fibrosis, hemophilia, and sickle cell disease. It also holds promise for the treatment and prevention of more complex diseases, such as cancer, heart disease, mental illness, and human immunodeficiency virus (HIV) infection.

Ethical concerns arise when genome editing, using technologies such as CRISPR-Cas9, is used to alter human genomes. Most of the changes introduced with genome editing are limited to somatic cells, which are cells other than egg and sperm cells. These changes affect only certain tissues and are not passed from parent to offspring. On the other side, changes made to genes in egg or sperm cells (sex cells) or in the genes of an embryo could be passed to future generations. Sex cell cell and embryonic genome editing stirs a number of ethical debates, including whether it would be permissible to use this technology to enhance normal human traits (such as durability, height or intelligence).

Due to the global debate centered on genome editing involving sex cells, many countries have currently prohibited such moves. You probably heard about the chinese faculty who got fired for editing tins at the embryo stage. debate on the issue can get even much hotter.